Author’s Note: Hey everyone. Here’s a fun and quirky story by friend of the page Charles Bucklin. This reminds me of my first ride on my last bike. I ran into a stop sign. Yes a stop sign. On a bike. This story is a lot more fun than that one. Make sure to stop by his page to get more of his zany stories at www.readmykooltales.com. Warning: Shenanigans ahead! 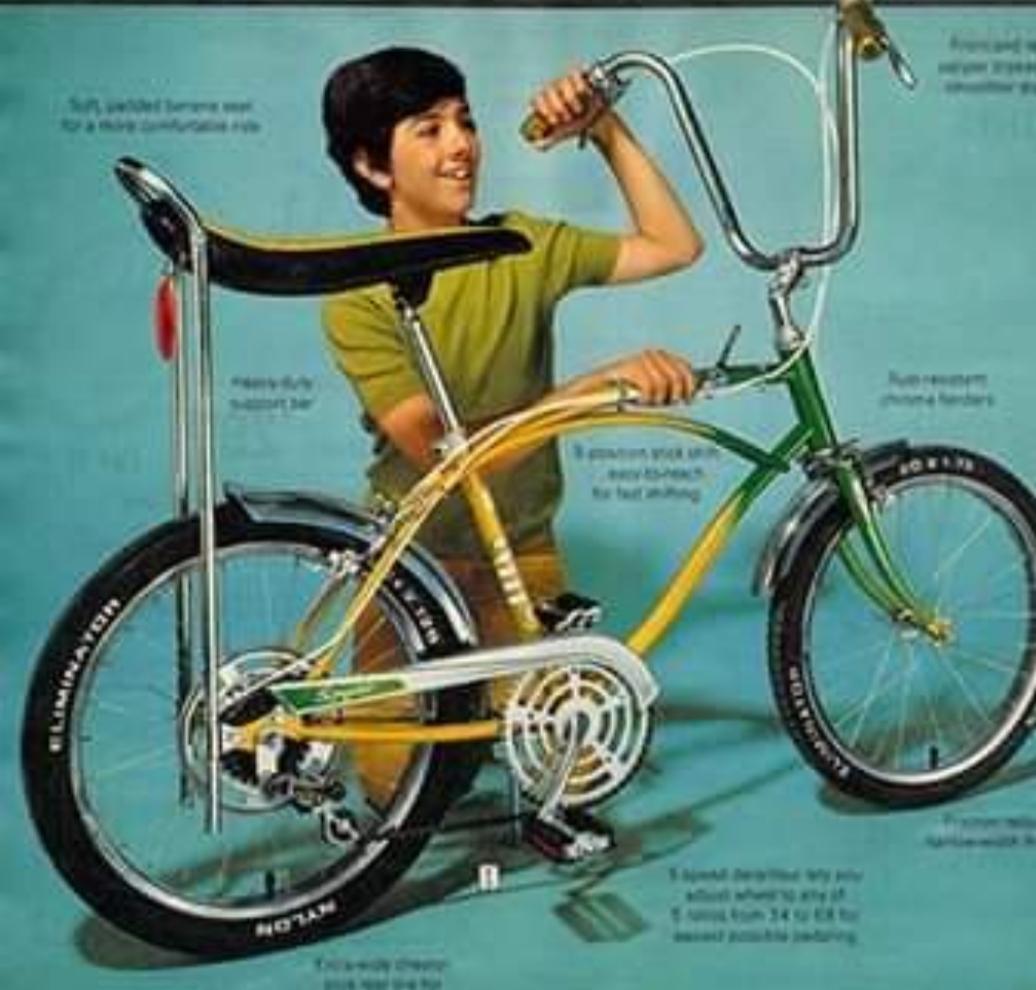 It was a stupid lookin’ bike.

The bike was painted in an ugly metallic green color giving it an appearance of a grasshopper  – if a bug could transform itself into a bicycle – this would have been the result.

Obviously, this flawed contraption was not made in America.

The kid called it a “Ten Speed” Bicycle.

So who needed “ten gears” and who built this crazy looking thing? Most likely “The French,” I thought.

Compared to my gold-painted American-as-Apple-Pie Schwinn Stingray bike, with it’s the banana seat, chopper handlebars and one gear does it all – this flimsy looking thing looked downright unsubstantial and complicated.

The bike owner came across like he was from some kinda rich family or something with his carefully combed hair, smelling like lavender-scented soap and bearing an affected manner.

He musta been a friend of a friend of one of the neighborhood kids as I had never met him before.

But here he was among the rest of my neighborhood pals showing off this damn thing in the street.

He rode it around in figure eights and pulled levers – which caused the chain to move up and down on several hub gears. “The gears give you “better control” in handling your bike, ” he said.

How could anything that resembled a plumbing accident on wheels have better control I ask you?

But ya know us kids? Always curious, always enthralled by the next “New Thing.”

It was a warm Summer afternoon in 1968 and I had gone outside to play by my house on Marchmont Court. The game plan was to ride bikes with my friends – that is until Fancy Pants had to come along and ruin everything.

Now, no one wanted to ride bikes, they just wanted to gawp at this new bicycle and ask a buncha questions.

After a while, the kid started to let the neighborhood children ride his bike down a nearby hill – just to check it out.

Feeling slightly curious I got in line to take a turn on the thing as it seemed my friends were really digging riding it up and down the steep hill.

Finally, it was my turn and I got on the bike facing downhill.

My first impression was I hated it. My short stumpy legs barely reached the pedals and I had to lean way down just to grasp the curved handlebars.

Someone gave me a shove and down the hill I careened, holding on for dear life and hollering my lungs out.

I was three quarters from the bottom of the hill when some wiseacre knucklehead decided to unconsciously dump his bike directly in my path.

Since no one had informed me how to stop the Ten-Speed – I did what I normally did on my Stingray which was to backpedal which traditionally activated the braking system. But, on this bike – nothing happened  – as I frantically backpedaled away in an effort to prevent my certain doom.

In less than a heartbeat, I abruptly plowed into the other bike with a loud CRASH sending me head over heels over the handlebars

Now based on the shape of the bicycle, the speed I was traveling and the direction of impact I was literally catapulted like a cannonball into the sky.

“AUUUUUGHHHH!” I screamed as my chubby eighty-five-pound frame flailed shrieking through the air like a human projectile.

It has been said that each of us has a Guardian Angel watching over us. And if that is the case – “My Guardian Angel” must have been working overtime – as I felt myself born by invisible wings over the seemingly impossible distance of thirty feet before making my descent.

As I descended to the ground like a stricken Icarus – I swear I saw a small airplane and a flock of birds pause in astonishment mid-flight as I tumbled through the air past them.

WWWWHUMP! I impacted into a hard neighborhood lawn creating a sizable crater – as I barely missed smashing to bits on the concrete pavement or becoming impaled on one of the upright lawn sprinklers.

After crawling out of the crater, and getting to my feet – I found much to my dismay that the kids were all pissed off at me for ruining the fun by wrecking the bike.

I weakly tried to defend my position but I was too shaken up after surviving my epic trajectory and crash landing.

So I limped home.

An hour later, my Mom was pissed off at me because she had received phone calls from two angry parents demanding money for a damaged bike and a trashed lawn.

So I was grounded for the rest of the week with no allowance for a month.

And even now –  my wife can’t understand why I never want to go bicycle riding with her.

I told ya it was a stupid bike story!